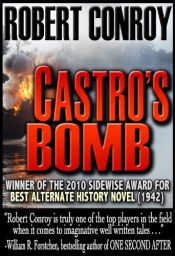 Set in 1963 after the Cuban Missile Crisis, Castro and his army use weapons left behind by the Russians to seize the U.S. base at Guantanamo Bay and then plan missile strikes against the U.S. From the corridors of power -- with John F. Kennedy trying desperately to retain his leadership and keep the war from escalating -- to soldiers and civilians both American and Cuban, this high-voltage novel follows the bloody fighting and struggles on the ground while never losing sight of how war can transform people and set in motion some highly unexpected consequences. Winner of the Sidewise Award for Best Alternate History Novel, bestselling author William R. Forstchen wrote, "Conroy's work is the type of book you simply can't put down."

“Robert Conroy is truly one of the top players in the field when it comes to imaginative well written tales. Be ready for some sleepless nights when you argue with yourself "I'll just read one more chapter," because Conroy's work is the type of book you simply can't put down.”
- William R. Forstchen, author of NYTimes bestseller ONE SECOND AFTER

on RED INFERNO:
“An ensemble cast of fictional characters … and historical figures powers the meticulously researched story line with diverse accounts of the horrors of war, making this an appealing read for fans of history and alternate history alike.”
- Publishers Weekly

*Starred Review* "Conroy’s latest novel is substantially his best. It supposes that in 1945, President Truman decided to send American troops across the Elbe to claim the American share of Berlin. That catches Stalin in a paranoiac mood, and the Red Army attacks the force headed to Berlin…Add the prospective disintegration of the Western Alliance over the prolongation of the war … and J. Edgar Hoover displaying a paranoia that rivals Stalin’s, and every aspect of the scenario becomes engrossing and grimly plausible. Even the book’s two well-realized romances add interest to the proceedings, and the suspense holds up literally to the last page. If Conroy’s enthusiasm for alternate history leads to a sequel to this one, it will continue a story comparable to the best by the subgenre’s masters."
- Booklist

on 1945:
“Conroy explores the carnage of war through numerous viewpoints (a naive American soldier, an escaped POW, a Japanese-American operative, the deposed emperor, etc.) with moving and thought-provoking results.”
- Publishers Weekly

on 1942:
“A high-explosive what-if, with full-blooded characters.”
- John Birmingham, author of WITHOUT WARNING

“Fans of Tom Clancy and Agent Jack Bauer should find a lot to like here.”
- Publishers Weekly

“A significant writer of alternate history turns here to the popular topic of Pearl Harbor, producing what is arguably his best book.”
- Booklist

on 1901:
“The yarn is likely to please both military history and alternative history buffs.”
- Booklist

“This cleverly conceived alternative history proposes that Kaiser Wilhelm II launches an invasion of the U.S in 1901 after President McKinley summarily rejects a demand that he surrender Cuba and the Philippines to the Germans … Conroy tells a solid what-if historical.”
- Publishers Weekly

After taking early retirement from automotive management, Conroy decided to combine his loves of history and writing. After discovering that Kaiser Wilhelm had plans to invade the U.S., he wrote his first alternate history, “1901,” in which the invasion took place. "1901" was a Book of the Month Club Alternate. Altogether, five of his novels have been published and three were nominated for the Sidewise Award, with “1942” winning the award for 2009. He has also written for Military History Magazine. He finds alternate history fascinating and the possibilities never-ending. He will not run out of plots. Conroy has an MBA and, when not writing, is adjunct faculty at Macomb Community College where he teaches business.

The Trade of Queens

The Two Georges: The Novel of an Alternate America …