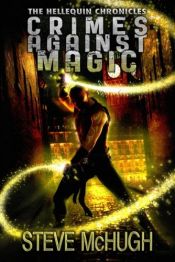 Crimes Against Magic (The Hellequin Chronicles)

Book 1 in the Hellequin Chronicles.

How do you keep the people you care about safe from enemies you can’t remember?

Ten years ago, Nate Garrett awoke on a cold warehouse floor with no memory of his past—a gun, a sword, and a piece of paper with his name on it the only clues to his identity. Since then, he’s discovered he’s a powerful sorcerer and has used his magical abilities to become a successful thief for hire.

But those who stole his memories aren’t done with him yet: when they cause a job to go bad and threaten a sixteen-year-old girl, Nate swears to protect her. With his enemies closing in and everyone he cares about now a target for their wrath, he must choose between the comfortable life he’s built for himself and his elusive past.

As the barrier holding his memories captive begins to crumble, Nate moves between modern-day London and fifteenth-century France, forced to confront his forgotten life in the hope of stopping an enemy he can’t remember.

The Mirror of Merlin