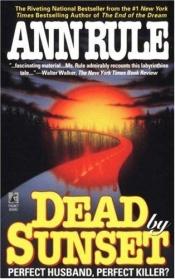 Dead By Sunset is a 1995 true crime nonfiction book by author Ann Rule. It is based on the 1986 Oregon case of the murder of Cheryl Keeton, who was found beaten to death inside her van on the Sunset Highway and the later conviction of her estranged husband, Brad Cunningham. The book made The New York Times Best Seller list in 1996.
Later in 1995, MSNBC aired a mini-series titled Dead By Sunset. It was based on the book and starred Annette O'Toole as Keeton and Ken Olin as Cunningham.
Bradly Morris Cunningham was admitted to the Oregon State Penitentiary on January 9, 1995 and is serving a life sentence. Bradly also wrote an ebook which has been published titled "Ann Rule Deconstructed". The copyright of his ebook is 2013. In the ebook, Bradly accused Ann Rule of being a liar and for exaggerating with regards to her "Dead By Sunset" book.

And Never Let Her Go: Thomas Capano: The Deadly Sed …

A Rage to Kill

Every breath you take