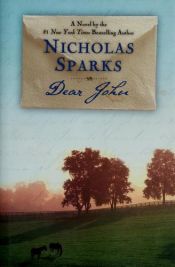 Dear John is a romance novel by American writer Nicholas Sparks released in 2006. Its plot is an adaptation to present day's American culture of three plays Marius, Fanny and César, called la Trilogie Marseillaise written by French author Marcel Pagnol circa 1930. It was on the New York Times bestseller list in 2007.
The story is about a romantic couple who fall in love over one summer. They are separated during the man's military service. John Tyree, the main character, has a father with Asperger's syndrome. The story is partially set in Wilmington, North Carolina where John's father was a single parent who had difficulty having meaningful conversation with his son and has an obsession with coin collecting. John knows there is something wrong with him but he has never been to a doctor to find out what it is. Feeling a lack of direction and no good fatherly influence in his life, John enlisted in the U.S. Armed Forces.
John returns home on leave from the army when he gets news of his fathers death. After the return he seeks out Savannah, where he is surprised to learn of her life events following her marriage to another man.