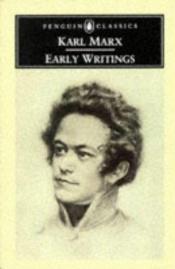 Written in 1833-4, when Marx was barely twenty-five, this astonishingly rich body of works formed the cornerstone for his later political philosophy. In the Critique of Hegel's Doctrine of the State, he dissects Hegel's thought and develops his own views on civil society, while his Letters reveal a furious intellect struggling to develop the egalitarian theory of state. Equally challenging are his controversial essay On the Jewish Question and the Economic and Philosophical Manuscripts, where Marx first made clear his views on alienation, the state, democracy and human nature. Brilliantly insightful, Marx's Early Writings reveal a mind on the brink of one of the most revolutionary ideas in human history - the theory of Communism. This translation fully conveys the vigour of the original works. The introduction, by Lucio Colletti, considers the beliefs of the young Marx and explores these writings in the light of the later development of Marxism.

A New Generation Draws the Line