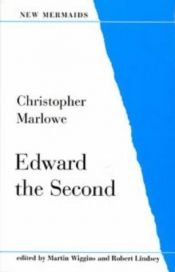 Edward II is a Renaissance or Early Modern period play written by Christopher Marlowe. It is one of the earliest English history plays. The full title of the first publication is The Troublesome Reign and Lamentable Death of Edward the Second, King of England, with the Tragical Fall of Proud Mortimer.
Marlowe found most of his material for this play in the third volume of Raphael Holinshed's Chronicles. Frederick Boas believes that "out of all the rich material provided by Holinshed" Marlowe was drawn to "the comparatively unattractive reign of Edward II" due to the relationship between the King and Gaveston. Boas elaborates, "Homosexual affection ... has a special attraction for Marlowe. Jove and Ganymede in Dido, Henry III and his 'minions' in The Massacre, Neptune and Leander in Hero and Leander, and all akin, although drawn to a slighter scale, to Edward and Gaveston." Boas also notes the existence of a number of parallels between Edward II and The Massacre at Paris, asserting that "it is scarcely too much to say that scenes xi–xxi of The Massacre are something in the nature of a preliminary sketch for Edward II."

The Tragical History of the Life and Death of Docto …

The Duchess of Malfi