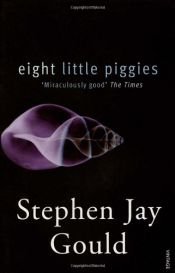 Eight Little Piggies is the sixth volume of collected essays by the Harvard paleontologist Stephen Jay Gould. The essays were selected from his monthly column "The View of Life" in Natural History magazine, to which Gould contributed for 27 years. The book deals, in typically discursive fashion, with themes familiar to Gould's writing: evolution and its teaching, science biography, probabilities and common sense.
The title essay, "Eight Little Piggies", explores concepts such as archetypes and polydactyly via the anatomy of early tetrapods. Other essays discuss themes such as the scale of extinction, vertebrate anatomy, grand patterns of evolution, and human nature.

Longitude: The True Story of a Lone Genius Who Solv …