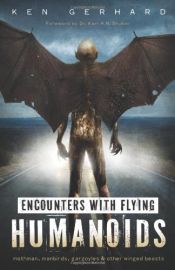 The fascinating stories of flying humanoids from around the world

A strange creature with gigantic, blood-red embers for eyes crept out of the dark in West Virginia. Dozens of witnesses reported seeing the winged beast―later identified as the Mothman―take flight, chasing cars at speeds exceeding 100 miles per hour.

Cryptozoologist Ken Gerhard has traveled the world collecting evidence on the Mothman, the Owlman, the Van Meter Creature, the Valkyrie of Voltana, the Houston Batman, and other strange “bird people” that have been sighted throughout history. Packed with famous historical cases and dozens of chilling first-person accounts, this is the first book to focus exclusively on flying humanoids―a wide array of airborne entities that seem to feed off our deepest fears.

Holy Ghosts: Or How a (Not-So) Good Catholic Boy Be …

Seeking Spirits: The Lost Cases of The Atlantic Par …

Hunt for the skinwalker : science confronts the une …