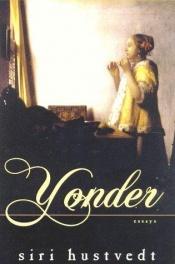 In her brilliant and daring novels The Blindfold and The Enchantment of Lily Dahl, Siri Hustvedt has won critical acclaim and a rapidly expanding international audience. But she is also a wide-ranging essayist and critic, frequently reexamining in her fascinating nonfiction many of the central leitmotifs of her fiction.

The six pieces in Yonder, Hustvedt's first book of essays, are all meditations on the complex relationship between art and the world. They include a personal essay on memory and place, which investigates the images we retain from our lives, the lives of others in the world, and the lives of characters in books. In "Vermeer's Annunciation," Hustvedt gives an entirely original interpretation of the Vermeer painting Woman with a Pearl Necklace. In "Ghosts at the Table," she examines the essence of still life as a genre in painting from Cotan and Chardin to Philip Guston. Other essays include a profound piece about Dickens, a reassessment of The Great Gatsby, and a witty and provocative assault on contemporary pieties entitled "A Plea for Eros."

The Geography of the Imagination

Into the looking-glass wood

The death of the moth and other essays

For the Love of Mike