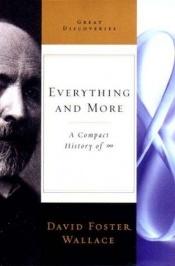 Everything and More: A Compact History of Infinity is a book by American novelist and essayist David Foster Wallace that examines the history of infinity, focusing primarily on the work of Georg Cantor, the 19th-century German mathematician who created set theory. The book is part of the W. W. Norton "Great Discoveries" series.
Neal Stephenson provided an "Introduction" to a reissued paperback edition, which Stephenson reprinted in his collection Some Remarks : Essays and Other Writing.
Reviewers including Rudy Rucker, A.W. Moore and Michael Harris have criticized its style and mathematical content.

The Visual Display of Quantitative Information

The Code Book: The Evolution Of Secrecy From Mary, …

Genius: The Life and Science of Richard Feynman

Electric universe : how electricity switched on the …