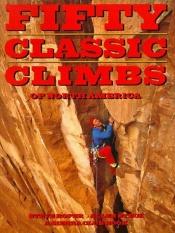 Fifty Classic Climbs Of North America is a climbing guidebook and history written by Steve Roper and Allen Steck. It is considered a definitive piece of climbing literature, known to many climbers as simply "The Book", and has served as an inspiration for more recent climbing books, such as Mark Kroese's Fifty Favorite Climbs. Though much of the book's contents are now out of date, it is still recognized as a definitive text which goes beyond the traditional guidebook.
The first edition was published in 1979, by Sierra Club Books in the United States and in Great Britain by the now defunct Diadem Books. This was followed by a paperback printing by Random House in 1981. Two subsequent editions were published by Sierra Club Books in 1982 and 1996. Between 1979 and 1999 it sold nearly thirty thousand copies, a considerable achievement for a climbing guide book.
Reviewing the book in American Alpine Journal, Fred Beckey wrote: "Roper and Steck have presented a profile of what could be considered the Great American Dream climbs with a writing style that provides much Lebensraum for speculation and meditation.

Wanderlust: A History of Walking

The climb up to hell

The Lost Art of Walking: The History, Science, and …

A Walk in the Woods: Rediscovering America on the A …