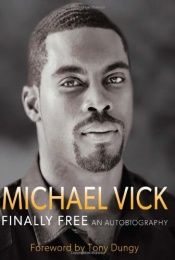 One of the most talented and polarizing athletes of our generation, Michael Vick's stunning story has captured news headlines across the nation. From his poverty-stricken youth, to his success on the field in high school and college, to his rise to NFL stardom and his fall from grace, Finally Free shows how a gifted athlete's life spiraled out of control under the glare of money and fame, aided by his own poor choices. In his own words, Vick details his regrets, his search for forgiveness, the moments of unlikely grace--and the brokenness that brought his redemption on the way to his celebrated return to the NFL with the Philadelphia Eagles.

"Finally Free tells an amazing story. It's not all pretty, but it's real. This book will let you know why I'm so proud of Michael Vick and honored to call him a friend."
--Tony Dungy, Former NFL head coach for the Indianapolis Colts

"Vick has apologized and acknowledged the suffering he caused. He has expressed his remorse and his desire to help more animals than he harmed by being an advocate for the humane treatment of animals. We realize the potential Vick has to reach at-risk youth and pull them out of the quicksand..."
--The Humane Society of the United States

"I want to be remembered as a guy who never gave up, whether with my family, out on the football field, in a prison cell, or playing one-on-one basketball with somebody in the neighborhood. Standing firm in God always, pushing through, even in my darkest moments."
--Michael Vick