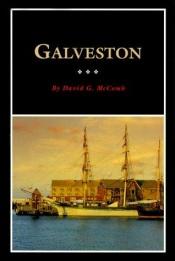 Galveston : a history and a guide

These are all a part of the colorful history of an island city that once called itself “The Free State of Galveston.” Located at a natural harbor on the northeastern part of a thirty-mile-long sand barrier island, the city dates its beginning from the end of the Texas Revolution. Before then, the harbor had attracted Jean Lafitte, a pirate from Louisiana, and the revolutionary Texan government fleeing in front of the attack of Santa Anna’s Mexican Army.

After independence in 1836, Michel B. Menard, along with nine associates, bought the harbor property and founded the town. Galveston grew on the strength of the harbor—the best between New Orleans and Veracruz—and the city became a major entry point for immigrants to Texas. During the Civil War it was a haven for Confederate blockade runners and the site of one of the major battles of the war in Texas. Afterward it was a center for occupation forces and the point from which Major-General Gordon Granger announced emancipation for Texas slaves on June 19, 1865 (Juneteenth Day). The city later became a major cotton port for the Southwest and the location of the University of Texas Medical School.

In 1900 Galveston was struck by a hurricane and flood that killed approximately six thousand people: the greatest disaster in the history of the United States. Afterward, the citizens built a sea wall, raised the grade of the island, and constructed a causeway for future protection. The city led the way with a commission form of government, and in the first half of the twentieth century, became noted for its illegal drinking, gambling, and prostitution.

After the Texas Rangers cleaned it up, Galveston developed into a tourist town with its attractions of the beach, hotels, celebrations, and fishing. Historic preservation projects such as houses, buildings, museums, and the square-rigged ship Elissa completed its evolution.

This authoritative and well-written history of Galveston provides an overview of the city’s rich and colorful past and provides readers, researchers, and tourists with information about today’s historical points of interest. Galveston: A History and a Guide is a delightful read and a useful traveling companion.

A.D.: New Orleans After the Deluge

The Fires of Jubilee

Blackbeard's cup and stories of the Outer Banks

The Indifferent Stars Above : The Harrowing Saga of …

Brennan's New Orleans Cookbook with the Story of th …

The Season: The Secret Life of Palm Beach and Ameri …