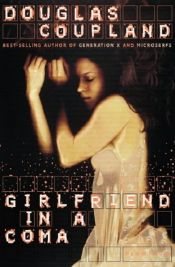 Girlfriend in a Coma

Girlfriend in a Coma is a novel by Canadian writer and artist Douglas Coupland. It was first published by HarperCollins Canada in 1998. The novel tells the story of a group of friends growing up in Vancouver, British Columbia, Canada in the late 1970s. On the night of a teenage house-wrecking party, one of the protagonists, Karen, falls into a coma. More alarmingly, she seemed to expect it, having given her boyfriend, Richard, a letter detailing the vivid dreams of the future she had experienced and how she wanted to sleep for a thousand years to avoid that dystopia.
The book was named after the 1987 single "Girlfriend in a Coma" by The Smiths. Additionally, Coupland uses other Smiths lyrics and song titles within the book such as "Bigmouth Strikes Again," "Hand in Glove," and "The Queen Is Dead."