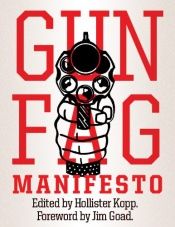 The subtitle said it all: "Entertainment for the Armed Sociopath."

Alas, like some few other worthwhile basement-budget publications from that micro-era (the pre-Google 90s), Gun Fag Manifesto seems to have disappeared down the memory hole. To remedy this injustice, Nine-Banded Books has teamed up with Underworld Amusements to collect all three issues of Herr Kopp s legendary high-capacity zine under one cover locked and loaded with a new introduction by Hollister and a foreword by ANSWER Me! editor Jim Goad.