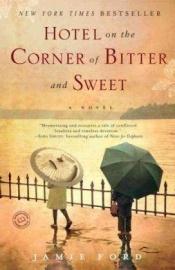 Hotel on the Corner of Bitter and Sweet is historical fiction. It is a bestselling novel by Jamie Ford about the love and friendship between Henry Lee, a Chinese American boy, and Keiko Okabe, a Japanese American girl, during the internment in World War II.
Henry meets a girl named Keiko. Soon, Henry and Keiko bond. The two become very close friends, even though both are bullied due to race. Henry feels a sense of filial piety to his parents. Although kind, Henry sneaks out one night and Keiko gives him her family pictures. Henry must protect these, before they are taken. He then travels with the lunch lady to work at Camp Harmony where he sees her. He follows her with his friend, a local Jazz musician named Sheldon, to Minidoka, Idaho. Upon finding her there, he promises to wait for her. They decide to write each other letters until the war is over, and Henry returns to Seattle.
He religiously mails Keiko letters, but receives very few in return. His father is intent on sending him to China, now that the Japanese are being pushed back, to finish his education traditionally. Henry arrives home one day to find a ticket to China in his name.

The School Of Essential Ingredients