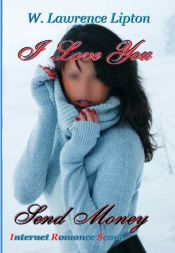 I Love YOU, Send Money

To find love is, at best, a Sisyphean occupation, yet it is an occupational activity desired by so many.

Internet Romance Scams are operated by both men and women, straight or gay. The target is irrelevant, the basic script remains the same:
“Hello, I’m upper class, single, attractive and find you attractive, I love you, help me solve my immediate problem, it’s financial, send me money and we’ll be together forever.”

Unlike most books which deal with what are now known as Nigerian scams, this book allows you to follow an actual series of exchanges between known practitioners and Ralph – a successful 68 year-old retired widower. The woman have one thing going for them, Ralph’s love-life has been one of marked by a series of very successful whirlwind relationships. From past experience, Ralph is a strong believer in ‘love-at-first-sight’ – even when first sight consists of an email followed by her making the initial visit.

Ralph was born into a world of absolutes, one in which the good guys wore white hats and the bad guy black – unless they where Hopalong Cassidy and Paladin – everything was measured in black and white, trust and distrust. It was a world where the Universe stepped in either to warn or assist. His mind had been trained during the Cold War, and liberated by the Age of Aquarius.

Dianetics: The Modern Science of Mental Health: A H …

How to Stop Worrying and Start Living

The Proper Care and Feeding of Husbands

Questioning the Millennium : A Rationalist's Guide …

A Return to Love

The Weight-Loss Cure "They" Don't Want You to Know …

The 7 Habits of Highly Effective People

12 Rules for Life: An Antidote to Chaos

Turtles all the way down : prerequisites to persona …