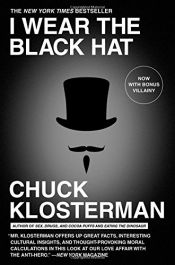 I Wear the Black Hat: Grappling with Villains (Real and Imagined)

Chuck Klosterman, “The Ethicist” for The New York Times Magazine, has walked into the darkness. In I Wear the Black Hat, he questions the modern understanding of villainy. When we classify someone as a bad person, what are we really saying, and why are we so obsessed with saying it? How does the culture of malevolence operate? What was so Machiavellian about Machiavelli? Why don’t we see Bernhard Goetz the same way we see Batman? Who is more worthy of our vitriol—Bill Clinton or Don Henley? What was O.J. Simpson’s second-worst decision? And why is Klosterman still haunted by some kid he knew for one week in 1985?

Masterfully blending cultural analysis with self-interrogation and imaginative hypotheticals, I Wear the Black Hat delivers perceptive observations on the complexity of the antihero (seemingly the only kind of hero America still creates). As the Los Angeles Times notes: “By underscoring the contradictory, often knee-jerk ways we encounter the heroes and villains of our culture, Klosterman illustrates the passionate but incomplete computations that have come to define American culture—and maybe even American morality.” I Wear the Black Hat is a rare example of serious criticism that’s instantly accessible and really, really funny.

Neck Deep and Other Predicaments

by Michael Chabon Manhood for Amateurs, The Pleasur …

I Was Told There'd Be Cake

Life would be perfect if I lived in that house

A Confession and Other Religious Writings