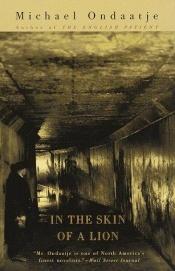 In the Skin of a Lion

In the Skin of a Lion is a novel by Canadian–Sri Lankan writer Michael Ondaatje. It was first published in 1987 by McClelland and Stewart. The novel fictionalises the lives of the immigrants whose contributions to building Toronto in the early 1900s never became part of the city's official history. Ondaatje illuminates the investment of these settlers in Canada, through their labour, while remaining "outsiders" to mainstream society. In the Skin of a Lion is thus an exposé of the migrant condition: "It is a novel about the wearing and the removal of masks; the shedding of skin, the transformations and translations of identity." lt was nominated for the Governor General's Award for English Language Fiction in 1987. Ondaatje's later and more famous novel The English Patient is, in part, a sequel to In the Skin of a Lion, continuing the characters of Hana and Caravaggio, as well as revealing the fate of this novel's main character, Patrick Lewis.
An important aspect of the novel is its depiction of Toronto in the 1930s. Ondaatje spent many months in the archives of the City of Toronto and newspapers of the era.