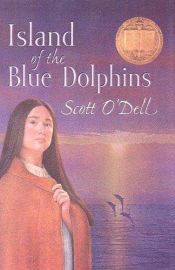 Island of the Blue Dolphins

Island of the Blue Dolphins is a 1960 children's novel written by Scott O'Dell. The story of a young girl stranded for years on an island off the California coast. It is based on the true story of Juana Maria, a Nicoleño Native American left alone for 18 years on San Nicolas Island in the 19th century.
Island of the Blue Dolphins won the Newbery Medal in 1961. It was adapted into a film of the same name in 1964. O'Dell later wrote a sequel, Zia, published in 1976.
The 50th Anniversary edition includes a new introduction by Newbery Medalist Lois Lowry and also includes extracts from Father Gonzales Rubio in the Santa Barbara Mission's Book of Burials.

The Mother Tongue: English and How It Got That Way