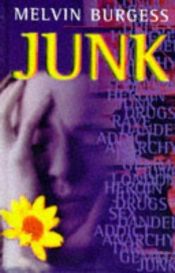 Junk, or Smack in the U.S., is a realistic novel for young adults by the British author Melvin Burgess, published in 1996 by Andersen in the U.K. Set on the streets of Bristol, England, it features two runaway teens who join a group of squatters, where they fall into heroin addiction and embrace anarchism. Both critically and commercially it is the best received of Burgess' novels. Yet it was unusually controversial at first, criticized negatively for its "how-to" aspect, or its dark realism, or its moral relativism.
Burgess won the annual Carnegie Medal from the Library Association, recognising the year's outstanding children's book by a British author. For the 70th anniversary of the Medal in 2007 Junk was named one of the top ten winning works, selected by a panel to compose the ballot for a public election of the all-time favourite. Junk also won the Guardian Children's Fiction Prize, a similar award that authors may not win twice. It is the latest of six books to win both awards.
In the U.S., Henry Holt published the novel in 1997 as Smack —another slang term for heroin.