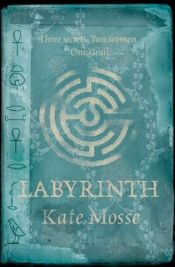 Labyrinth is an archaeological mystery English-language novel written by Kate Mosse set both in the Middle Ages and present-day France. It was published in 2005.
It divides into two main storylines that follow two protagonists, Alaïs and Alice. The two stories occur in a shared geography and intertwine. The novel relies heavily on historical events such as the massacre at Béziers and the Crusade against the Cathars in Occitania, now the South of France, from around 1200. The text itself features many Occitan and French quotes. Ultimately the story becomes a quest for the Holy Grail.
In the 2006 British Book Awards, Labyrinth was awarded Best Read of the Year. According to The Sunday Times, it was the second best selling book in the United Kingdom in 2006, after The Da Vinci Code, selling about 865,400 copies in paperback. The Guardian ranked it the number one bestseller for 2006. An extract from the novel was used in the Scottish Qualifications Authority's 2009 Standard Grade English General close reading paper.