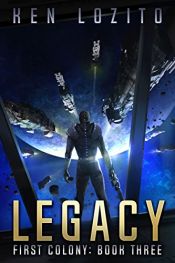 After narrowly defeating the invading enemy fleet, there is evidence that the attack isn’t over.

Thousands have died and all that stands between human extinction and the invaders are the remnants of the colonial military.

Connor must find a way to rally the colony using every scrap of ingenuity to stop the invaders. But will he succeed when he finds himself pitted against mankind’s ultimate enemy? This could be mankind’s final hour . . . or its greatest victory.