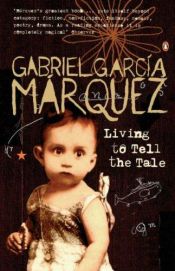 Living to Tell the Tale

Living to Tell the Tale is the first volume of the autobiography of Gabriel García Márquez.
The book was originally published in Spanish in 2002, with an English translation by Edith Grossman published in 2003.
Living to Tell the Tale tells the story of García Márquez' life from 1927 through 1950, ending with his proposal to his wife. It focuses heavily on García Márquez' family, schooling, and early career as a journalist and short story writer, and includes references to numerous real-life events that ended up in his novels in one form or another, including the Banana massacre that appears prominently in One Hundred Years of Solitude and the friend of his whose life and death were the model for Chronicle of a Death Foretold.

My Invented Country : A Nostalgic Journey Through C …

The country under my skin : a memoir of love and wa …

This I Believe: An A to Z of a Life