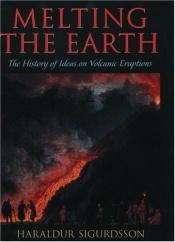 Melting the earth : the history of ideas on volcanic eruptions

From prehistoric times to the fiery destruction of Pompeii in 79 A.D. and the more recent pyrotechnics of Mt. St. Helens, volcanic eruptions have aroused fear, inspired myths and religious worship, and prompted heated philosophical and scientific debate. Melting the Earth chronicles humankind's attempt to understand this terrifying phenomenon and provides a fascinating look at how our conception of volcanoes has changed as knowledge of the earth's internal processes has deepened over the centuries.
A practicing volcanologist and native of Iceland, where volcanoes are frequently active, Haraldur Sigurdsson considers how philosophers and scientists have attempted to answer the question: Why do volcanoes erupt? He takes us through the ideas of the ancient Greeks--who proposed that volcanoes resulted from the venting of subterranean winds--and the internal combustion theories of Roman times, and notes how thinking about volcanoes took a backward, symbolic turn with the rise of Christian conceptions of Hell, a direction that would not be reversed until the Renaissance. He chronicles the 18th-century conflict between the Neptunists, who believed that volcanic rocks originated from oceanic accretions, and the Plutonists, who argued for the existence of a molten planetary core, and traces how volcanology moved from "divine science" and "armchair geology" to empirical field study with the rise of 19th-century naturalism. Finally, Sigurdsson describes how 19th and 20th-century research in thermodynamics, petrology, geochemistry and plate tectonics contribute to the current understanding of volcanic activity.
Drawing liberally from classical sources and firsthand accounts, this chronicle is not only a colorful history of volcanology, but an engrossing chapter in the development of scientific thought.

Krakatoa: The Day the World Exploded

The measure of a mountain

Cheerful Weather for the Wedding

Origins: The Evolution of Continents, Oceans and Li …

Climate Crash: Abrupt Climate Change and What it Me …