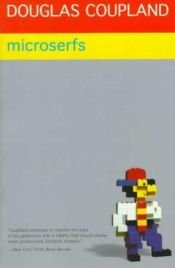 Microserfs, published by HarperCollins in 1995, is an epistolary novel by Douglas Coupland. It first appeared in short story form as the cover article for the January 1994 issue of Wired magazine and was subsequently expanded to full novel length. Set in the early 1990s, it captures the state of the technology industry before Windows 95, and anticipates the dot-com bubble of the late 1990s.
The novel is presented in the form of diary entries maintained on a PowerBook by the narrator, Daniel. Because of this, as well as its formatting and usage of emoticons, this novel is similar to what emerged a decade later as the blog format.
Coupland revisited many of the ideas in Microserfs in his 2006 novel JPod, which has been labeled "Microserfs for the Google generation".

The Book of Illusions