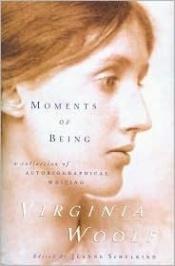 MOMENTS OF BEING is a collection containing Virginia Woolf's only autobiographical writing. The author was well born, and in "Reminiscenses," the first of five pieces, she focuses on the death of her mother, "the greatest disaster that could happen," and its effect on her father, the demanding Victorian patriarch.

"A Sketch of the Past" is the most significant of the pieces. It gives an account of Woolf's early years and illuminates her relationship with her father, who played such a vital role in her development as a writer.

The other three pieces were composed to be read to the members of the Memoir Club, a group of Bloomsbury habitues whose trademark was absolute candor in their dealings with each other.

Criticisms, Reflections and Maxims of Goethe

Departmental Ditties; And Other Verses