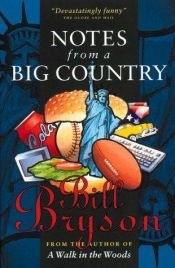 Notes from a Big Country

Notes from a Big Country, or as it was released in the United States, I'm a Stranger Here Myself, is a collection of articles written by Bill Bryson for The Mail on Sunday's Night and Day supplement during the 1990s, published together first in Britain in 1998 and in paperback in 1999. The book discusses Bryson's views on relocating to Hanover, New Hampshire, after spending two decades in Britain.
The American and British editions are not quite identical as, besides spelling differences, some explanatory information suitable for each intended audience is added or omitted within individual articles. This is freely acknowledged in the introduction.

Round Ireland with a fridge

Into the Heart of Borneo