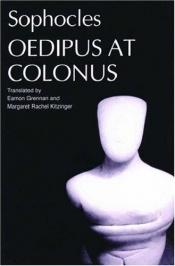 Oedipus at Colonus is one of the three Theban plays of the Athenian tragedian Sophocles. It was written shortly before Sophocles' death in 406 BC and produced by his grandson at the Festival of Dionysus in 401 BC.
In the timeline of the plays, the events of Oedipus at Colonus occur after Oedipus the King and before Antigone; however, it was the last of Sophocles' three Theban plays to be written. The play describes the end of Oedipus' tragic life. Legends differ as to the site of Oedipus' death; Sophocles set the place at Colonus, a village near Athens and also Sophocles' own birthplace, where the blinded Oedipus has come with his daughters Antigone and Ismene as suppliants of the Erinyes and of Theseus, the king of Athens.