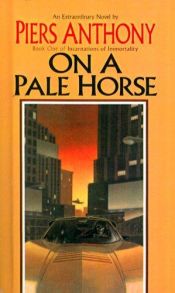 On a Pale Horse is a fantasy novel by Piers Anthony, first published in 1983. It is the first of eight books in the Incarnations of Immortality series. The book focuses on Zane, a photographer about to commit suicide who instead kills Death and must assume his office.
The title is derived from the sixth chapter of Book of Revelation, in which one of the Four Horsemen of the Apocalypse, Death, rides upon a pale horse.
The book spawned a five-issue comic series, released by Innovation in 1993. It was also the inspiration for the television series, Dead Like Me, which worked on the premise that there are multiple Grim Reapers working the planet.

Stardust, Being a Romance Within the Realms of Faer …