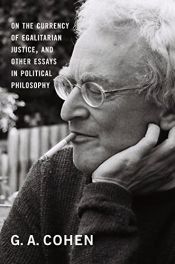 On the currency of egalitarian justice, and other essays in political philosophy

G. A. Cohen was one of the most gifted, influential, and progressive voices in contemporary political philosophy. At the time of his death in 2009, he had plans to bring together a number of his most significant papers. This is the first of three volumes to realize those plans. Drawing on three decades of work, it contains previously uncollected articles that have shaped many of the central debates in political philosophy, as well as papers published here for the first time. In these pieces, Cohen asks what egalitarians have most reason to equalize, he considers the relationship between freedom and property, and he reflects upon ideal theory and political practice.

Included here are classic essays such as "Equality of What?" and "Capitalism, Freedom, and the Proletariat," along with more recent contributions such as "Fairness and Legitimacy in Justice," "Freedom and Money," and the previously unpublished "How to Do Political Philosophy." On ample display throughout are the clarity, rigor, conviction, and wit for which Cohen was renowned. Together, these essays demonstrate how his work provides a powerful account of liberty and equality to the left of Ronald Dworkin, John Rawls, Amartya Sen, and Isaiah Berlin.

Recipes For Disaster: An Anarchist Cookbook A Movea …

Goddess of the market : Ayn Rand and the American R …