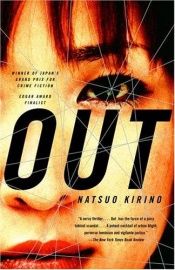 Out is a 1997 Japanese crime novel written by Japanese author Natsuo Kirino and published in English in 2004. The novel won the 51st Mystery Writers of Japan Award for Best Novel. It is her first novel to be published in the English language. The book is currently published by Vintage, part of Random House, in Britain and has been translated into English by Stephen Snyder. The English translation was nominated for the 2004 Edgar Award for Best Novel.
A Japanese film adaptation of Out, directed by Hirayama Hideyuki, was released in 2002 to generally tepid reviews. According to Variety, New Line Cinema has purchased the rights for an American version, to be directed by Nakata Hideo.

In the Miso Soup