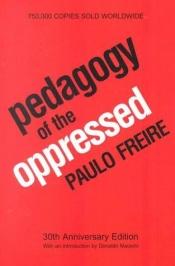 Pedagogy of the Oppressed

The Lord of the Rings