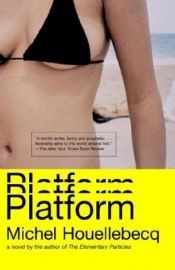 Platform is a 2001 novel by controversial French writer Michel Houellebecq. It has received both great praise and great criticism, most notably for the novel's apparent condoning of sex tourism and anti-Muslim feelings. The author was charged for inciting racial and religious hatred after describing Islam as "stupid", but saw charges dismissed.
A play in Spanish based on the book, adapted and directed by Calixto Bieito, premiered at the 2006 Edinburgh International Festival.

The Possibility of an Island

I Wish Someone Were Waiting for Me Somewhere