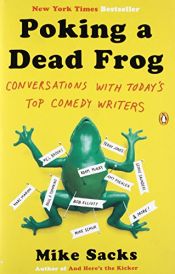 Amy Poehler, Mel Brooks, Adam McKay, George Saunders, Bill Hader, Patton Oswalt, and many more take us deep inside the mysterious world of comedy in this fascinating, laugh-out-loud-funny book. Packed with behind-the-scenes stories—from a day in the writers’ room at The Onion to why a sketch does or doesn’t make it onto Saturday Night Live to how the BBC nearly erased the entire first season of Monty Python’s Flying Circus—Poking a Dead Frog is a must-read for comedy buffs, writers and pop culture junkies alike.

This Mitchell and Webb book