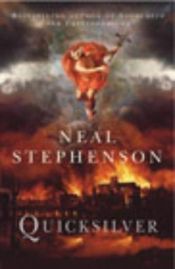 In this wonderfully inventive follow-up to his bestseller Cryptonomicon, Neal Stephenson brings to life a cast of unforgettable characters in a time of breathtaking genius and discovery, men and women whose exploits defined an age known as the Baroque.
Daniel Waterhouse possesses a brilliant scientific mind -- and yet knows that his genius is dwarfed by that of his friends Isaac Newton, Gottfried Wilhelm Leibniz, and Robert Hooke. He rejects the arcane tradition of alchemy, even as it is giving birth to new ways of understanding the world.
Jack Shaftoe began his life as a London street urchin and is now a reckless wanderer in search of great fortune. The intrepid exploits of Half-Cocked Jack, King of the Vagabonds, are quickly becoming the stuff of legend throughout Europe.
Eliza is a young woman whose ingenuity is all that keeps her alive after being set adrift from the Turkish harem in which she has been imprisoned since she was a child.
Daniel, Jack, and Eliza will traverse a landscape populated by mad alchemists, Barbary pirates, and bawdy courtiers, as well as historical figures including Samuel Pepys, Ben Franklin, and other great minds of the age. Traveling from the infant American colonies to the Tower of London to the glittering courts of Louis XIV, and all manner of places in between, this magnificent historical epic brings to vivid life a time like no other, and establishes its author as one of the preeminent talents of our own age.