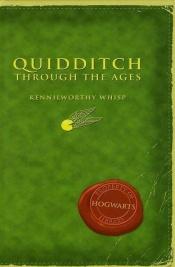 Quidditch Through the Ages

Quidditch Through the Ages is a 2001 book written by British author J. K. Rowling about Quidditch in the Harry Potter universe. It purports to be the Hogwarts library's copy of the non-fiction book of the same name mentioned in several novels of the Harry Potter series. Rowling's name does not appear on the cover of the book, the work being credited under the pseudonym "Kennilworthy Whisp".
The book benefits the charity Comic Relief. Over 80% of the cover price of each book sold goes directly to poor children in various places around the world. According to Comic Relief, sales from this book and its companion Fantastic Beasts and Where to Find Them have raised £17 million.

Fantastic Beasts and Where to Find Them

The Tales of Beedle the Bard