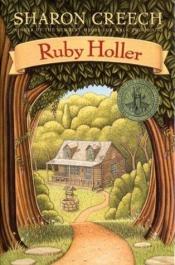 Ruby Holler is a low fantasy novel for children by the American writer Sharon Creech, published by HarperCollins in 2002. It features adolescent orphan twins who are "trouble" and an eccentric older couple who adopt them and take them back to live in "magical" Ruby Holler.
Creech won the annual Carnegie Medal from the British librarians, recognizing the year's best children's book published in the U.K.. In a retrospective citation, the librarians call it "a beautifully written story about love and trust and how the strength and goodness of human beings can overcome all the odds". Creech was the first American winner of the British award and the first person to win both the American Newbery Medal and the British Carnegie.

The Land of the Silver Apples