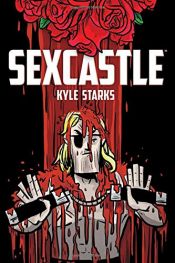 A NEW 6X9 EDITION OF THE EISNER-NOMINATED SEXCASTLE!

Shane Sexcastle, formerly the World's Greatest Assassin, has paid his debt to society for killing the vice president. Leaving his violent past (also: prison) behind, he's decided to settle down and sell flowers in a small, quiet town—but that doesn't mean he'll tolerate the fools who think they run this town.

An homage to to the likes of Die Hard, Road House, and '80s-era WWF wrestling, SEXCASTLE may just be the single greatest '80s action movie never made.

"Come for the action, stay for the laughs and the surprisingly poignant character work."—The Onion's A.V. Club