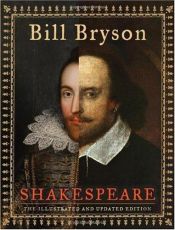 Shakespeare: The World as Stage is a biography of William Shakespeare by author Bill Bryson. The 199-page book is part of Harper Collins' series of biographies, "Eminent Lives". The focus of the book is to state what little is known conclusively about Shakespeare, and how this information is known, with some discussion of disproved theories, myths, and that which is believed by the public but not provable. It also explores the political, social, cultural and economic background to Shakespeare's work.
The book is also available as an unabridged audiobook, published by Harper Audio and read by the author.