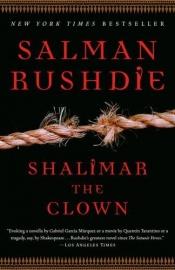 Shalimar the Clown is a 2005 novel by Salman Rushdie, the author of The Satanic Verses and Midnight's Children.
Shalimar the Clown was initially published on September 6, 2005 by Jonathan Cape and has attracted significant attention, comparable to his earlier publications, particularly The Moor's Last Sigh and Midnight's Children. Shalimar the Clown derives its name from Shalimar Gardens, in the vicinity of Srinagar, one of several Mughal Gardens, which were laid out in several parts of undivided India when the Mughals reigned over the subcontinent. Shalimar is the name of one of the characters featured in the novel.
Shalimar the Clown won the 2005 Vodafone Crossword Book Award and was one of the finalists for the 2005 Whitbread Book Awards.