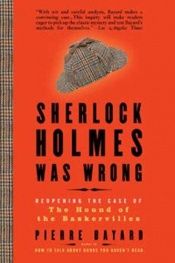 Sherlock Holmes was Wrong: Re-opening the Case of the "Hound of the Baskervilles" is a 2007 book by French professor of literature, psychoanalyst, and author Pierre Bayard.
By re-examining the clues, and carefully interpreting them in the context in which Doyle's book was conceived and written, Bayard clears the hound of all wrongdoing and argues that the actual murderer got away with the crime completely unsuspected by Holmes—not to mention by the numerous readers of the story over the past century and even, in a sense, by the author himself.
The book is translated from the French edition.

The Rest Is Noise

Breaking the Spell: Religion as a Natural Phenomeno …