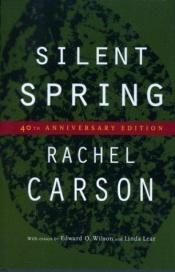 Silent Spring is an environmental science book written by Rachel Carson and published in 1962. The book documented the detrimental effects on the environment—particularly on birds—of the indiscriminate use of pesticides. Carson accused the chemical industry of spreading disinformation and public officials of accepting industry claims unquestioningly.
In the late 1950s, Carson turned her attention to conservation, especially environmental problems that she believed were caused by synthetic pesticides. The result was Silent Spring, which brought environmental concerns to the American public. Silent Spring was met with fierce opposition by chemical companies, but it spurred a reversal in national pesticide policy, led to a nationwide ban on DDT for agricultural uses, and inspired an environmental movement that led to the creation of the U.S. Environmental Protection Agency.

The Botany of Desire: A Plant's-Eye View of the Wor …

Medusa And The Snail: More Notes Of A Biology Watch …

Refuge: An Unnatural History of Family and Place