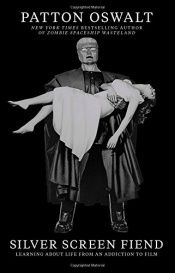 Silver Screen Fiend: Learning About Life from an Addiction to Film

New York Times bestselling author, comedian, and actor Patton Oswalt shares his entertaining memoir about coming of age as a performer and writer in the late ’90s while obsessively watching classic films at the legendary New Beverly Cinema in Los Angeles.

Between 1995 and 1999, Patton Oswalt lived with an unshakeable addiction. It wasn’t drugs, alcohol, or sex. It was film. After moving to L.A., Oswalt became a huge film buff, absorbing classics and new releases at least three nights a week at the New Beverly Cinema. Silver screen celluloid became Patton’s life schoolbook, informing his notions of acting, writing, comedy, and relationships. Set in the nascent days of the alternative comedy scene, Oswalt’s memoir chronicles his journey from fledgling stand-up comedian to self-assured sitcom actor, with the colorful New Beverly collective supporting him all along the way.

Ideally timed for awards season, when everyone’s mind is on Hollywood, Silver Screen Fiend follows up on the terrific reception of Oswalt’s New York Times bestselling debut, Zombie Spaceship Wasteland. Already a beloved fixture on the comedy stage, on television, and in film—not to mention his 1.87 million Twitter followers—Oswalt announces, with this second book, that he’s also here to stay on the page.