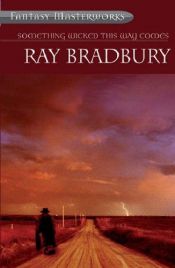 Something Wicked This Way Comes is a 1962 fantasy novel by Ray Bradbury. It is about 13-year-old best friends, Jim Nightshade and William Halloway, and their nightmarish experience with a traveling carnival that comes to their Midwestern town on one October. The carnival's leader is the mysterious "Mr. Dark" who seemingly wields the power to grant the citizenry's secret desires. In reality, Dark is a malevolent being who lures these individuals into binding themselves in servitude to him. He is revealed to possess a tattoo bearing the likeness of each person he has thus tricked. Mr. Dark's presence is countered by that of Will's father, Charles Halloway, who harbors his own secret desire to regain his youth because he feels as though he is too old for Will.
The novel combines elements of fantasy and horror, analyzing the conflicting natures of good and evil which exist within all individuals. Unlike many of Bradbury's other novel-length works, such as Dandelion Wine and The Martian Chronicles, which are fix-ups, Something Wicked This Way Comes is a single full-length narrative.

Stranger in a Strange Land