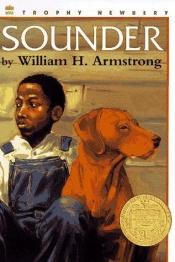 Sounder is a young adult novel by William H. Armstrong. It is the story of an African-American boy living with his sharecropper family. Although the family's difficulties increase when the father is imprisoned for stealing a ham from work, the boy still hungers for an education.
"Sounder", the dog's name, is the only character name used in the book. The author refers to the various characters by their relationship or their role in the story. The setting is also ambiguous. The author notes prisoners were hauled in "mule-drawn wagons", and the mention of chain gangs places an upper limit to the story of 1955 when the practice ended. The boy hears his father may be in Bartow and later Gilmer counties but the author does not specify where the boy lives. Since the boy is assured his father wouldn't be taken out of state, and because the ground freezes, we are left to assume the family lives in the counties around northern Georgia or northwestern South Carolina.
Sounder won the Newbery Award in 1970, and was made into a major motion picture in 1972.

I love my hair!