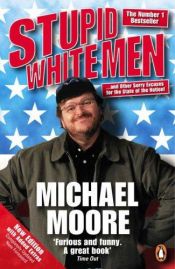 Stupid White Men ...and Other Sorry Excuses for the State of the Nation!

Remember when everything was looking up? When the government was running at a surplus, pollution was disappearing, peace was breaking out in the Middle East and Northern Ireland, and the Bridge to the 21st century was strung with high–speed Internet cable and paved with 401K gold?
Well, so much for the future. Michael Moore, the award–winning provocateur behind Roger & Me and the bestseller Downsize This!, now returns to size up the new century – and that big, ugly special–interest group that's laying waste to the world as we know it: stupid white men. Whether he's calling for United Nations action to overthrow the Bush Family Junta, calling on African–Americans to place 'whites only' signs over the entrances of unfriendly businesses, or praying that Jesse Helms will get kissed by a man, Stupid White Men is Mike's Manifesto on Malfeasance and Mediocrity. So if you're feeling the same way and you're wondering what's going to give out first – the economy, Dick Cheney's pacemaker, or your new VW Beetle – here's the book for you.

A Man Without a Country

Stranger in a Strange Land