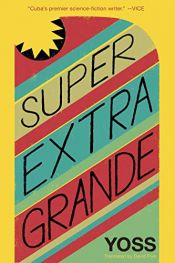 “Intergalactic space travel meets outrageous, biting satire in Super Extra Grande…. Its author [Yoss] is one of the most celebrated—and controversial—Cuban writers of science fiction…. Reminiscent of Douglas Adams—but even more so, the satire of Rabelais and Swift.” —The Washington Post

With the playfulness and ingenuity of Douglas Adams, the Cuban science-fiction master Yoss delivers a space opera of intergalactic proportions with Super Extra Grande, the winner of the twentieth annual UPC Science Fiction Award in 2011.

In a distant future in which Latin Americans have pioneered faster-than-light space travel, Dr. Jan Amos Sangan Dongo has a job with large and unusual responsibilities: he’s a veterinarian who specializes in treating enormous alien animals. Mountain-sized amoebas, multisex species with bizarre reproductive processes, razor-nailed, carnivorous humanoid hunters: Dr. Sangan has seen it all. When a colonial conflict threatens the fragile peace between the galaxy’s seven intelligent species, he must embark on a daring mission through the insides of a gigantic creature and find two swallowed ambassadors—who also happen to be his competing love interests.

Funny, witty, raunchy, and irrepressibly vivacious, Super Extra Grande is a rare specimen in the richly parodic tradition of Cuban science fiction, and could only have been written by a Cuban heavy-metal rock star with a biology degree: the inimitable Yoss.

The Ferengi Rules of Acquisition