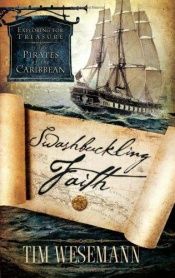 Swashbuckling Faith: Exploring for Treasure with Pirates of the Caribbean

What unexpected markers do you find along your faith journey, ones that lead you closer to God? In Swashbuckling Faith , author and former pastor Tim Wesemann helps you find surprising doorways to God’s truth in the scenes and dialogue of the Pirates of the Caribbean movie series. Created merely to entertain, these movies find Captain Jack Sparrow and his cohorts unintentionally leaving behind traces of truth ready to be explored and expanded in light of the Bible. Wesemann springboards from these glimpses to explore scriptural lessons on faith, prayer, contentment, spiritual warfare, forgiveness, hope, and much more. When your biblical perception starts finding treasures of truth in popular culture and everyday occurrences, you’ll set sail for the adventure of a lifetime!

Captain Jack Sparrow (that’s Johnny Depp, to you lovers of cinema) is the charming pirate in the popular Pirates of the Caribbean movies that buried Hollywood in gold. The films captured imaginations young and old, but now Tim Wesemann invites you to depart on an even greater adventure—for real!

Following the treasure map of God’s Word, this dangerous exploration will reveal priceless gems of not-so-buried, no-so-pirate booty! You’ll uncover hidden traces of truth and priceless pearls of faith. Lessons on prayer, contentment, spiritual warfare, forgiveness, and hope will awaken you to messages your true Captain is conveying all around you. Because even a pirate movie, looked at through new lenses, can point the way to tangible riches of biblical truth.

“Funny and whimsical with just a touch of sheer insanity.”

Pastor and author of Finding God in a Galaxy Far, Far Away

“Shiver me timbers! As a parent of teens and preteens, I can’t wait to share these briny depths of faith and inspiration with my family!”

“A veritable treasure trove of wisdom and piratey-good fun that’s not only entertaining to read, but draws you closer to God.”

“Swashbuckling Faith is a fresh, funny, and surprisingly rich book that falls somewhere between a devotional and a pirate manual.”

Author of If You Want Breakfast in Bed, Sleep in the Kitchen

Radio personality, humor columnist, author of Who Put the Cat in the Fridge

Story Behind the Book

Tim Wesemann is not a pirate, nor does he act as one on TV. While “swashbuckler” may not appear on his resume, he loves exploring for biblical treasure and often discovers it where you might least expect it—including a secular movie with pirates who pillage, plunder, and pilfer. Even scenes and dialogue from Pirates of the Caribbean served to help grow his faith in God. While the movie is a favorite in the Wesemann household, Tim also draws from past experiences as a pastor and his present insights as a fulltime Christian author and speaker.

Love wins : a book about heaven, hell, and the fate …

I Sold My Soul on eBay

Trusting God: Even When Life Hurts!

Battlefield of the Mind for Teens: Winning the Batt …

Sun Stand Still: What Happens When You Dare to Ask …