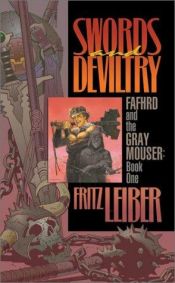 Swords and Deviltry is a fantasy short story collection by Fritz Leiber featuring his sword and sorcery heroes Fafhrd and the Gray Mouser. It is chronologically the first volume in the complete seven volume edition of the collected stories devoted to the characters. The book was first published in paperback in 1970 by Ace Books, which reprinted the title numerous times through November 1985; later paperback editions were issued by ibooks and Dark Horse. It has been published in the United Kingdom by New English Library, Mayflower Books and Grafton. The first hardcover edition was issued by Gregg Press in December 1977. The book has also been gathered together with others in the series into various omnibus editions; The Three of Swords, Ill Met in Lankhmar, The First Book of Lankhmar, and Lankhmar.
The book collects three short stories originally published in the magazines Fantastic for April 1970, Fantastic Stories of Imagination for October 1962, and The Magazine of Fantasy and Science Fiction for April 1970, together with an "Induction" that originally appeared in the 1957 Fafhrd and Gray Mouser collection Two Sought Adventure

The Last Light of the Sun